Judge Charles Brower of the Iran-United States Claims Tribunal in The Hague wrapped up the Pacific McGeorge International Jurist Series with a wide-ranging discussion of "Hot Topics in International Law," on April 3.
Brower is the longest-serving member of a tribunal that has finalized 3,900 cases since the United States terminated diplomatic relations between the two countries following the 1980 Iranian Hostage Crisis. As a partner at 20 Essex Street Chambers in London, he has also earned a reputation as one of the leading arbitrators at the United Kingdom Bar. A recent issue of The American Lawyer magazine designated him the world's busiest arbitrator.
One of the cases that Brower focused on in his speech is the Chevron/Ecuador Lago Agrio dispute that has been ongoing for decades. On Feb. 28, 2012, an international arbitration panel in The Hague said it will consider an appeal by Chevron of a record $18 billion in environmental fines for polluting tracts of the Amazon. The case stems from lawsuits alleging that Texaco, now a Chevron subsidiary, failed to clean up large swaths of the oil-rich Ecuadoran jungle where it first began drilling operations in the 1960s.
Prosecutors in Ecuador have threatened to impound Chevron assets throughout the world, even seizing the company's tanker ships as they sail through the Panama Canal. Chevron still has a pending appeal with Ecuador's national court. Chevron has also battled the huge fine in U.S. District Court.
Brower, who took questions from student attendees on a variety of other topics, has served as a visiting law professor at the University of Virginia and Cambridge University.
The Pacific McGeorge International Jurist Series presented several other prominent judges this academic year: Judge Joan Donoghue on Aug. 31; Judge Fausto Pocar on Oct. 20; Judge Juan Guzmán Tapia on Nov. 1; Judge Sebastián Picasso on Feb. 16, and concluded with this visit from Judge Charles Brower on Apr. 3. 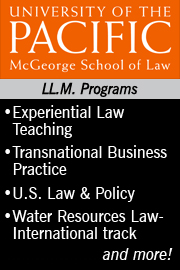 http://www.mcgeorge.edu/Academic_Programs/LLM_and_JSD_Programs.htm
Posted by Legal-Ease International Inc. at 10:26 AM